After 18 years at the Cleveland Museum of Art, The Lion and the Fatling return home to Evergreen Hill Cemetery. It was an emotional, awesome sight to see the carefully wrapped lion sculpture arrive on the back of a large flatbed truck. The sculpture was carefully removed from the flatbed truck by a skillful forklift driver hired by the Cleveland Museum of Art. It almost appeared that the lion was smiling and saying, “Hey everyone, I’m home!” This transpired on Wednesday, April 2,2014 and was witnessed by a small crowd of villagers, Cemetery Board members, reporter and photographer from The Times, myself (Jane Babinsky) and Pat Zalba our Curator.

The Lion and the Fatling sculpture was created by Master Artist (this is how he referred to himself), Henry Church,Jr. in 1887. Henry Church, Jr, a blacksmith by trade, was born in Chagrin Falls May 20,1836 and died at his home on South Franklin Street in April 1908. The sculpture was based upon The Bible verse Isaiah 11:6, “The wolf also shall dwell with the lamb, and the leopard shall lie down with the kid; and the calf and the young lion and the fatling together; and a little child shall lead them.” Originally the sculpture had a child leading the lion and the fatling with a chain. Vandals removed the child and chain as well as the glass eyes. (The lion’s eyes were replaced by the Cleveland Museum of Art when they prepared the sculpture for exhibition.) Church did many stone sculptures, but this is the one he chose for his gravesite. The sculpture was placed in Evergreen Hill Cemetery somewhere between 1904 and 1906 after the cemetery board finally consented to Henry Church’s request to move it there.

The Cleveland Museum of Art wanted to feature Henry Church, Jr in their 1996 exhibit, Transformations in Cleveland Art, 1796-1946. This was the second of four exhibits to celebrate Cleveland’s bicentennial year. The curator at the time, David Steinberg, contacted my mother (Frances Stem Babinsky) and asked if the family would loan the museum a few pieces from our collection. They also requested to have the sculpture from the cemetery as one of the pieces in the exhibit. After determining that it would be feasible to move the large sculpture we gave our consent. The sculpture was moved a few months before the exhibit, which was from May 19-July 21,1996 at the Cleveland Museum of Art at University Circle. When the exhibit closed, my mother and I decided to allow the museum to have this particular sculpture on a permanent loan basis to protect it from vandalism at the cemetery. The Lion and the Fatling was on display in the courtyard of the art museum until the museum began its renovations and remodeling.

Henry’s sculpture was sadly put into storage and after the construction was done it was determined that there was no longer a proper place to display the sculpture. I received a call from the Curator of American Painting and Sculpture, Mark Cole, informing me that they were no longer going to display the sculpture and what did I want to do with it? My answer, of course, was return it to Henry’s gravesite at Evergreen Hill Cemetery! The return was orchestrated by Mary Suzor, Director of Collections Management of the Cleveland Museum of Art. Her crew along with Cemetery Sexton, Rob Arnold and his crew, accomplished the task in a little under two hours. Sheffield Monuments owner and helper were there to secure the sculpture on it’s base with a special type of caulking putty and of course helped to guide the sculpture to the proper setting on it’s base. The heavy sculpture was moved from a truck with a forklift, transported to the foot of the base, straps placed around the sculpture to the raised forklift and slowly lifted and moved over the base and slowly guided down and secured upon the base. The question is, how did Henry Church do it? Something to ponder. 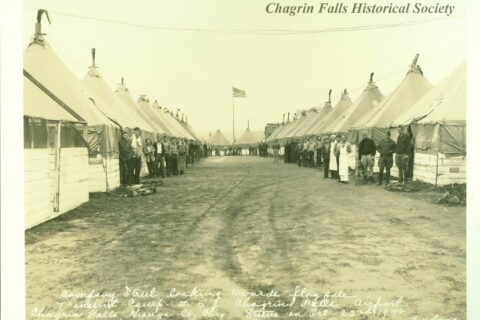