Top
You are here: Home / Uncategorized / The World According to Max 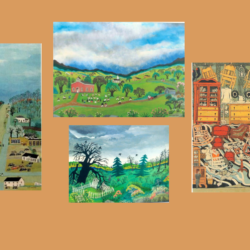 Stop in to the Bo Burr Community Room Gallery at the Chagrin Falls Historical Society & Museum to see: The World According to Max. This is the largest collection of Max Barnard’s work currently on display. The entire museum collection of Max’s paintings is on display, as well as paintings on loan from his family. This exhibit is sponsored in memory of Beverly & Howard Myers.

Max Barnard began at a young age as a house painter and paperhanger in Chagrin Falls. He was a self-taught artist who began painting in the 1940s and was recognized for his primitive paintings of scenes recalled from his childhood. Barnard won first prize at the prestigious May Show of 1954 for a painting on a window shade. His work has been exhibited at the Chagrin Valley Art Club in 1973, and at the Heartland Museum in Harvard, MA in 1986. He completed more than 2,000 works in almost 30 years, using mostly house paint! Barnard also had a sketchbook of pen-and-ink drawings of Chagrin Falls residents. Barnard died in Millersburg, Ohio, and is buried in Chagrin Falls. At the time of his death in 1978, he was survived at the time by a granddaughter, Beverly Myers.