The Artwork of Henry Church Jr. 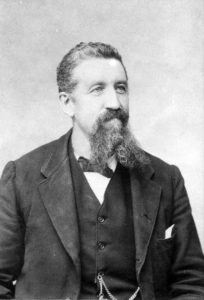 Henry Church Jr. (1836-1908)
Henry Church Jr. might have been one of the most talented people to ever live in Chagrin Falls. Born in 1836 as one of the first children in the settlement, residents referred to him as a “born blacksmith.” After learning the trade from his father, he opened his own blacksmith shop. However, Church Jr. had a unique quirkiness that carried him to hobbies beyond his profession. He played in the village band. He also kept Triangle Park in perfect shape. But most importantly, the world of art had always caught his eye, and he began applying his craft on the side. Typically, his work would be categorized as folk art. His pieces ranged from stone sculptures, which he sold at his blacksmith shop, to paintings. A museum in Geauga Lake served as a gallery for his work. The Cleveland Museum of Art displayed his lion tombstone that he carved for himself in their courtyard. Even John D. Rockefeller, billionaire and founder of Standard Oil, possessed some of Church Jr.’s artwork. One of the most interesting things about Church Jr. is how he balanced his time between work and hobby. He is responsible for the locally famous carving at Squaw Rock, which many experts have lauded as masterful. While he was sculpting the work he would leave his blacksmith shop in the afternoon, walk two miles to the rock’s location along the Chagrin River, and work until nightfall. Henry Church Jr. had a drive like no other, which he combined with an elite talent in a multitude of areas. He even made the weather vane on the top of town hall, which remains in Chagrin Falls to this day. 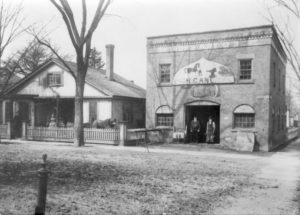 Henry Church had his blacksmith shop on the corner of S. Franklin St. and E. Washington St., where the Masonic temple and Lowes’ TV are now. His art studio was upstairs. He and his family lived next door. This photo shows his blacksmith shop on the right and his house on the left. If you look closely you can see his lion sculpture in the front yard.

Use the links below for more information about Henry Church Jr.