The Chagrin Falls Historical Society has an extensive photograph collection which chronicles the businesses, government, houses, schools, and people of the Village and the surrounding area. The collection includes glass plate images from the 1860s – 1890s, photographs from The Chagrin Falls Exponent,  old and new photos of businesses and houses within the historic districts, and numerous photographs donated by Village residents.

The majority of the collection has been cataloged – each photograph has been assigned a distinct accession number and stored in an acid free folder, and photographs are sorted and stored in topical boxes.

Our volunteers have been digitizing and electronically cataloging this collection over the past 11 years. Over 8,000 photographs have been processed. Digital images have been shared with local organizations, businesses, researchers, and individuals.

The archiving software used to catalog the photographs permits us to search for photos of houses by address and to search for images of people by name, even if the individual is pictured with a group.

Here are some iconic views of Chagrin Falls from our collection. Click on the image  for a larger view. Use your <back> button to return. 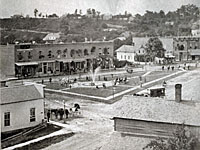 Triangle Park in 1875. Note the fountain in the center. 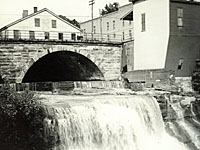 The high falls in 1906. The popcorn shop is now in the building on the right. 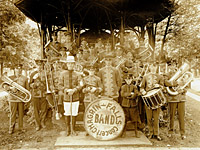 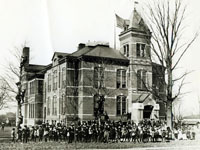 The Chagrin Falls Union School was built on Philomethian Street in 1885. The photo shows the school ca. 1890. They probably don’t let the boys climb the trees for the class photo anymore. An auditorium and more classrooms were added in 1893.

The New High School Building, still part of the intermediate school, was built facing East Washington Street in 1915 and expanded in 1939. The 1885 Union School building was demolished in 1940. 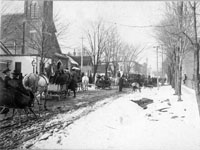 Sunday school sleigh ride by the Methodist Church on South Franklin St. in 1888. 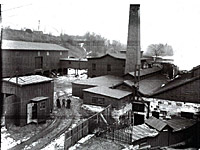 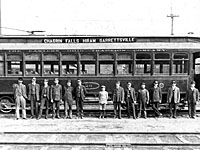 Township hall was built as a one story building in 1848. A second story opera house with a cupola was added in 1875. The weather vane on top of the cupola was made by local blacksmith and artist Henry Church, Jr. This photo shows Township Hall with two stories in 1937 or 1938. The second story burned on November 30, 1943, and the building was rebuilt with only one story in 1944. The weather vane survived the fire and was replaced on a new cupola, where it remains to this day. 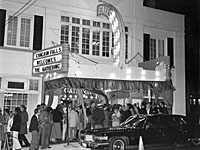 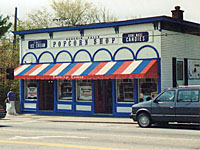 The Chagrin Falls Popcorn Shop was opened in 1948 in the former showroom of a gristmill at the high falls. Here it is in 1980.